Looks nice , but don't know if I like the monochrome type scheme. The front end looked a bit blah, even less inspiring than the Jeep grill/front end.
The interior treatment looks a bit more luxurious and upscale. Liked the console/shifter look.
Wheels looked cool.

I wonder if those tail lights will work on the Escape and if the metal guards come off .

quote:Originally posted by Cicindela
I wonder if those tail lights will work on the Escape and if the metal guards come off .

I was wondering the samething. I would like to transplant the rear lights and headlights onto my Escape. Posted by on 04-18-2003 07:02 PM:

quote:Originally posted by escapeohio
I was wondering the samething. I would like to transplant the rear lights and headlights onto my Escape.

If the headlights on the production vehicle are the same as those on the show car, I do not believe they will fit, however, looking at the ones shown on the Escape Hybrid, those may fit. Take a look at the portion where the headlight meets the grill. The Mariner is "pointed" at that point whereas our 'scapes, and the hybrid are "rounded". 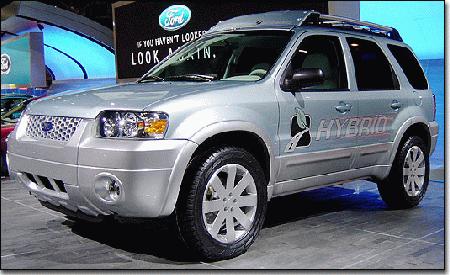 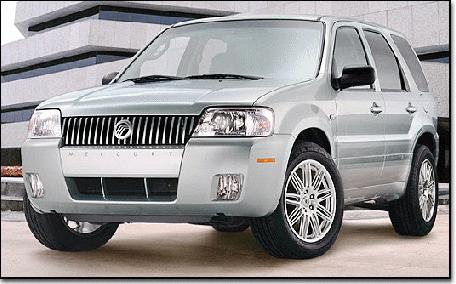 The brake lights, however look like a more part for part swap, which makes sense considering the complexity of the parts they fit into (Why do a third variant of the basic shell and tailgate if you don't HAVE to) Posted by JustJerk on 04-18-2003 09:32 PM:

Should be going sometime next week! I'll try to get good pictures.

The site update cracked me up...
"Escape Tribute Forums"

"General Chat - Talk about ANYTHING here, your Escape, Tribute, Mariner, and more!" 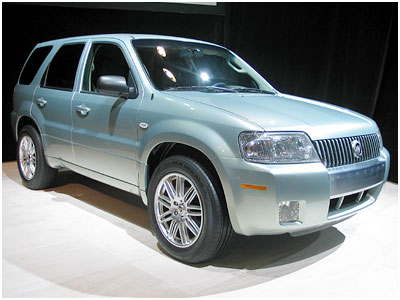 The all-new 2005 Mercury Mariner sport utility joins a flood of new products Lincoln-Mercury plans to add during the next three years. Mariner debuts in 2004 as the third of four all-new nameplates being added the Mercury showroom. 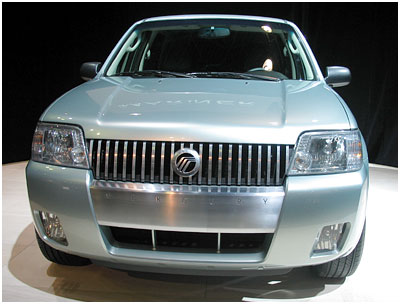 “There’s a lot of excitement in store for our Mercury dealers during the next few years,” said Darryl Hazel, president, Lincoln Mercury. “Customers are going to see a new look and a new showroom selection rolling out beginning this fall.”
Mariner in Mercury’s Showroom.


Building on the style and success of the Mountaineer, Mariner brings contemporary Mercury design to customers who are looking for a compact urban SUV, but don’t need the cargo and passenger space of the larger, seven-passenger vehicle. The Mariner will be the entry-level sport utility in the Lincoln-Mercury showroom, which features a comprehensive lineup of upscale and luxury SUVs including the Mercury Mountaineer, Lincoln Aviator and the full-size Navigator.

Distinctive Mercury Design
Based on one of the best-selling small sport utilities on the market, the Ford Escape, the Mercury Mariner is designed for customers who want a little more. Mariner delivers a new level of design sophistication, more standard features, upgraded interior materials and unique content that appeals to Mercury buyers. 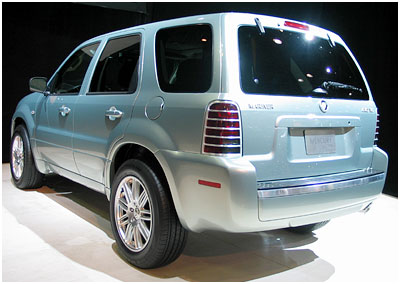 “Our goal is to achieve a high level of differentiation in our Mercury products in a clean, contemporary design,” says J Mays, Ford Motor Company vice president of Design. “These are clean, intelligent designs without a lot of excess. The design is thoroughly modern inside and out, with a Mercury family resemblance and a particular attention to detail on the interiors.”


The new designs feature a stacked element theme at the front of the vehicle with distinctive headlamps over integrated foglamps and vertical, satin aluminum finished grill elements. As the newest iteration of Mercury design, Mariner adds a satin aluminum bumper insert, which ties in with the grill design. The “U” shaped air intake contributes to the tailored and organized theme.

Mariner strikes a sophisticated profile with color-keyed body side cladding offering chip and ding protection in an integrated, clutter-free design. Turn signal repeater lamps are mounted on the fenders, another distinctive Mercury design cue, which further distinguishes Mariner from the competition. The wheels on the Mariner concept are cast aluminum with a satin finish.

The taillamps are shrouded with horizontal satin aluminum accent grilles, which also appear on the Mountaineer and the Monterey minivan.
“The Mariner has a level of design sophistication that is a step above in this segment,” says Mays. “The exterior is a clean, smart, modern design. The interior is a great place to be – inviting and distinctive, with just the right look and feel of luxury.” 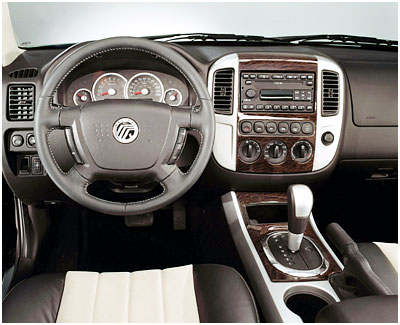 [/IMG]
The Interior
Mercury is going to great lengths to introduce high levels of craftsmanship in its interiors, where customers spend most of their time interacting with their vehicle. Ford, Lincoln and Mercury have increased investment in interior craftsmanship threefold in recent years. Mariner’s interior design and execution will further separate it from the competition.

The tailored interior is highlighted with wood grain, satin aluminum and chrome accents. For a sporty feel, the customer will enjoy the new floor-mounted shifter, which is accented with a chrome surround and a satin aluminum shift knob. The instruments in the cluster have bright bezels and dark gray faces. Satin aluminum and wood grain bezels on the unique center console and center stack further contribute to the rich interior theme. 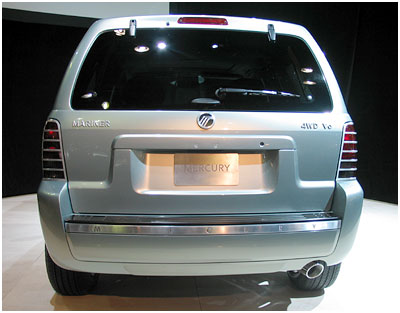 Fun To Drive
Mariner was designed to be a visually appealing, functional and capable SUV. Mariner is tuned for the urban environment with outstanding car-like handling. The production Mariner will be available in front- or four-wheel-drive for buyers seeking added surefootedness in inclement weather. Mariner benefits from an all-new electronic four-wheel drive system, which automatically transfers torque from front to rear as required by road conditions without driver intervention.

“This combination means Mariner automatically adapts to adverse road conditions, whether snow or ice-covered city streets, or a rough dirt road,” says Phil Martens, vice president of Product Creation, North America. “Mariner is distinctive and sophisticated as well as agile, nimble and maneuverable - it drives like a car but offers SUV versatility.” 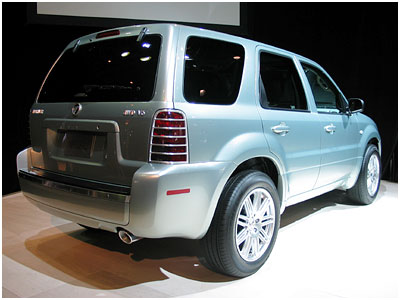 Mariner Safety Features
Mariner features the latest level of the Personal Safety System™ one of the most comprehensive and technologically advanced safety systems available in any vehicle in any class. Seat mounted front side air bags and side air curtain airbags are optional.

The all-new 2005 Mercury Mariner will be produced at the Ohio Assembly Plant in Avon Lake and will go on sale in late 2004.

The New Look Of Ford: Next Escape Design? (Pics)

I guess we can assume that the Escape wont have a complete do over soon as the base for this 05 Merc is the same as the current escape.

Two things I notice from these pics:

1 - Looks like the Mariner is getting Escape Limited coloring (whole body color matches/ no two tone). It also looks like not only is the wheel cladding gone but there is different cladding on the lower body area between the 2 wheels. Has anyone been to NYC live? What do these things look like in person? Good? Bad? other?

Is it just me, or does this Mariner interior look like it's from a whole different truck? Compared to the new Escape interior, the Mariner "looks" huge inside.

Lights, consoles, cool side markers, I wonder how interchangeable all these different parts will be? Once I order my new Escape (the day these new ones come out

) Looks like I'll have some substitute modding to do.

Looks like the Mercury boys had some left over Cougar gauges.

I can take the heat cause I'm the other white meat!

I want that floor shifter!

I can take the heat cause I'm the other white meat!

I was never one for Mercuries, but this one looks like a winner. I actually like it a lot

I just hope they produce this exactly as it's pictured

why can't those mirrors be painted as well... looks like Ford went to the trouble of color matching every plastic bits to match the primary color so why not the mirrors. They look really out of place now with the monotone paint job.